Breaking News
Home / News / Leah Sharibu is still alive, we are working on her release- FG

Leah Sharibu is still alive, we are working on her release- FG 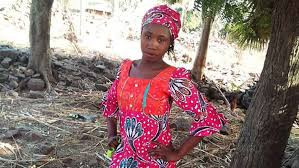 The Federal Government has denied reports that Leah Sharibu is dead.

Leah, a student of Government Girls Science and Technical Secondary School, Dapchi in Yobe state, was kidnapped by a faction of Boko Haram terrorists in February 2018.

Garba Shehu, senior special assistant to the president on media and publicity, denied the reports of Sharibu’s death when he spoke with journalists in Abuja today Saturday August 31st. According to Garba, the government is not giving up on negotiations for her release.

“Instead of giving up, the government is carrying forward processes that should hopefully yield her release by her captors. Lines of communications remain open with the kidnappers, ISWAP, to secure the release of Leah Sharibu. Contrary to false reports, she is alive – given assurances from our security agencies-, and the government is committed to her safe return, as well as all other hostages to their families.

“Kidnapping for ransom should never be encouraged. This means not capitulating to the demands of terrorists: refrain from rewarding their heinous crimes with payment. With the abduction of loved family and friends, the government understands how difficult these times are for them, but the government is pursuing many options to ensure the safe return of Leah Sharibu.” he said

Share
Previous French Formula 2 driver Anthoine Hubert, 22, is killed in a crash at the Belgium Grand Prix
Next One personÂ killed, nine others wounded during a knife attack at a subway in France