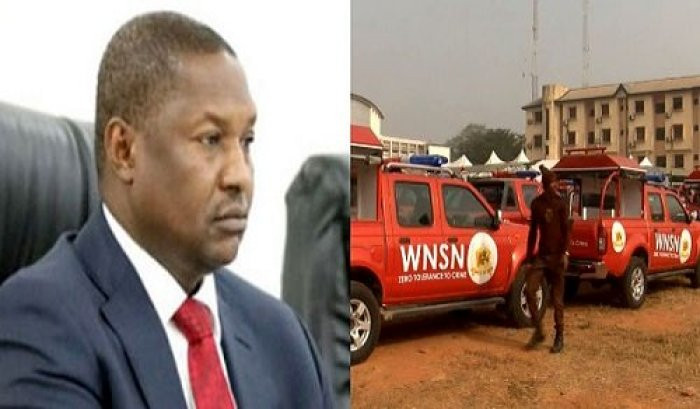 Abubakar Malami, Nigeria’s Attorney General and Minister of Justice, today insisted that the establishment of the Southwest security outfit, Operation Amotekun, is illegal and has no place in the constitution.

In a statement released by his Special Assistant on Media, Dr. Umar Gwandu, Malami said the Federal Government would not bat an eye due to sentiment being displayed by people on the matter.

According to him, the bottom line was that Nigeria’s constitution does not accommodate formation of regional security architecture.

“This is a fact which is undisputable and undeniable. Mr. Falana was prevaricating and circumlocuting using evasive techniques when he was asked by the media to justify the presence of lacuna within the law which could establish or protect the concept of regionalism in any operation in the country.

“This arrangement called Amotekun is not backed by any law neither at the State nor at the Federal Government level. Amotekun, therefore, remains unconstitutional and illegal as already indicated,” he stated.

The South West governors on January 9th, launched the security outfit which they claim is solely to solve the insecurity challenges in the South West.

“The Western Nigeria Security Network Operation Amotekun is nothing but a community policing response to a problem that our people would like to put an end to” Ekiti state governor, Kayode Fayemi, said at the launch of Amotekun