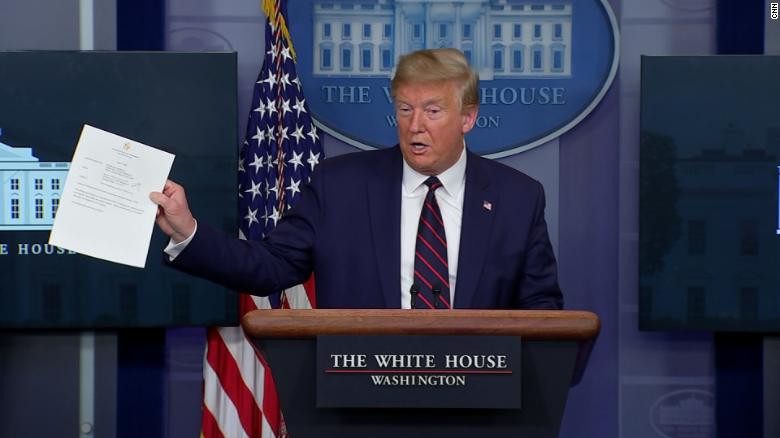 In a memo distributed by press secretary Stephanie Grisham just before the daily White House coronatask force briefing, it was gathered that the US President was tested by White House physician Sean Conley.

“This morning, the President was tested again for Covid-19, utilizing a new rapid point-of-care test capability. He is healthy and without symptoms.”

President Trump also confirmed he underwent a second test and got his test result in 15 minutes. He was tested using “a new, rapid point-of-care test capability”.

Holding up the memo, the US President said;

“I took the new test, which provides results in 15 minutes really out of curiosity to see how quickly it worked, how fast it worked.

“I did take a test. It just came out, this is from the White House physician. I just took it this morning.

“And I took it, it took me literally a minute to take it and it took me — I guess it was 14 or 15 minutes (for results). I went to work, I didn’t wait for it, but it said it took 14 minutes or something with a conclusion and it said the President tested negative for Covid-19.”

Lack of adequate test kits has bedeviled the Trump administration’s response to the coronavirus, making it hard for public health officials and scientists to track the spread of the disease and see where hotspots are popping up. In response, federal health officials approved a coronavirus test last month that can provide results in less than 15 minutes, using the same technology that powers some rapid flu tests.

Thursday’s press conference came after more than a million cases of the virus was confirmed worldwide.

Share
Previous "Never marry anyone you have not seen without makeup" Reno Omokri warns men as he accuses women who use makeup of "deception"
Next Mask on, Gloves Off: Socializing in a Pandemic… Sponsored by OldMutual Insurance